In Search Of Treasure: Pirate Stories 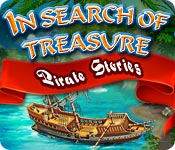 Many years ago, the ship of the legendary pirate Henry Morgan ran into a terrible storm. To save themselves from the wild elements, the ship’s crew headed toward an island not far away. Along the way, their ship became stranded on the reefs! Stuck on the island with no promise of rescue, the crew decided to bury their treasures there. As a former cabin-boy who is all grown up, you have returned to the island as the captain of your own ship in order to take the pirates’ treasures for yourself!