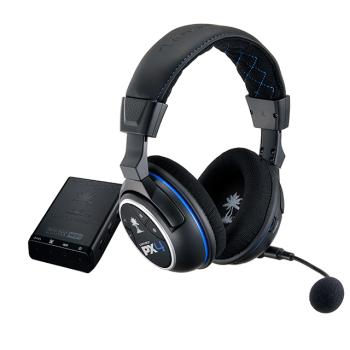 Get blown away by your games and movies in Dolby Digital Surround Sound with the Turtle Beach Ear Force PX4. With up to 15 hours of uninterrupted, crystal clear wireless play, the PX4 not only dominates for PS4, PS3, and Xbox 360 games, but lets you experience Netflix or blu-ray movies in cinematic surround sound.

The Dolby Digital Surround Sound produced by this headset will ensure that you hear every sound in your game with 360-degree accuracy. The PX4 allows you to adjust the angle of each speaker inside the headset so you can fine-tune the surround sound audio to your specific individual taste. Turtle Beach uses Dual-Band Wi-Fi technology to provide a non-static, interference-free connection by navigating to a less crowded bandwidth around all the laptops, tablets, smartphones and other wireless devices that compete for space in your home.

Get amazing sound out of your PlayStation 4 games with a realistic and immersive audio experience. The PX4 also works great with PS3, Xbox 360, and for mobile chat.

Adjust the speaker angles inside your headset to ensure that your 360-degree Dolby Digital Surround Sound experience for games, music, and movies is fine-tuned to your individual liking.

Use Bluetooth to take phone calls while never leaving the game.

Turtle Beach offers chat volume that automatically increases as the game volume gets louder, so your teammates are never drowned out by sudden explosions.

Get up to 15 hours of continuous play from a full charge, or just plug it in and keep charging while you play.