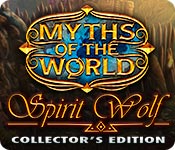 The wolf spirit still haunts… will you heed its call?

You’re an expert in Native American symbolism who’s been called to investigate some glowing glyphs. Your amulet, which has been in your family for generations, begins to glow as soon as you arrive, as if it’s part of this place…

As you begin to investigate, you encounter strange ghosts from the past. Find out what caused their rift all those generations ago and how you’re connected to this place and its spirit.