Imperial Island: Birth of an Empire 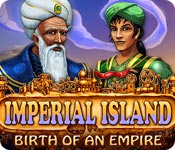 Help Emperor Omadan rebuild a prosperous empire in Imperial Island: Birth of an Empire! The wise Emperor Omadan once ruled over a great empire. The territory flourished, bringing joy to its people and arousing envy in Omadan’s enemies. After many years of prosperity, the enemies of his great empire launched a relentless invasion. To avoid the destruction of his people, the Emperor made a difficult but wise decision. He fled along with all of the survivors to seek a land where his empire could begin anew. Help Emperor Omadan on his quest to reconstruct his lost empire in this gripping Match 3 game!