Secrets of the Dark: The Flower of Shadow Collector's Edition 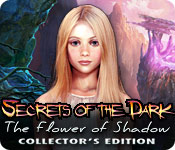 From Orneon Limited, creators of the Secrets of the Dark and Echoes of the Past series, comes a thrilling new secret to uncover!

A father’s frantic plea sends you in search of his daughter, Maria, who seems to have vanished into thin air. A mysterious and supernatural force has kidnapped her on her 16th birthday, sealing her room with a magical glow. Your investigation leads you from an odd, flower-shaped lamp through a portal – an ordinary room becomes a nightmarish forest! Can you find Maria in time? Or will she be trapped forever in a shadowy realm by a creature bent on revenge? Find out in this exciting Hidden Object Puzzle Adventure game!