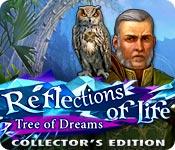 For 25 years, you’ve thought you were an orphan. But one stormy night, a mysterious man steps out of a mirror in your home and claims to be your uncle. What’s more, he says your parents are still alive! The city they live in is under attack from a force that could threaten the entire world… and you’re the only one who can stop it. Do you have the courage to step into the mirror and face your destiny? Find out as you journey through a series of strange and beautiful worlds in this Hidden Object Puzzle Adventure game!