Nightmares from the Deep: Davy Jones 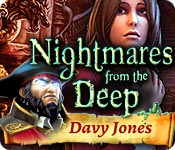 Brought to you by Artifex Mundi, the creators of the Enigmatis series and Grim Legends: The Forsaken Bride.

After discovering mysterious notes confirming the truth of the Davy Jones legend, Sarah calls a press conference to reveal to the whole world that the old sea-devil and his mythical treasure are real, hidden away on a mysterious island.

Suddenly, the galleon of the infamous pirate appears on the horizon, and Davy Jones himself breaks into the museum to kidnap Sarah and her daughter.

Both Sarah and her daughter are thrown into the brig of Jones’ ship. They manage to escape, and while searching for a way back to shore, they discover dark secrets about the ship’s otherworldly origins. But before they can escape on one of the lifeboats, they are caught, and to save her mother, Cory agrees to a sign a dark pact with Davy Jones…