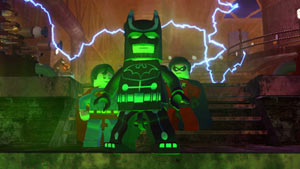 Lot’s of Superhero Fun!!……..with some VERY slight issues I’ve been able to play both the Wii and PC versions of this game, a bit obsessively I might add. My 6 year old loves the game. He sometimes needs my help with some of the more confusing puzzles, but there are other instances where I’m amazed at what he is able to figure out on his own. I’m not sure I would have been so savvy when I was 6.There are a lot of similarities to other Lego games, but just as many differences and enhancements to make it interesting.I love the enhancements Lego has made to the overall package. The characters talking really makes the story come alive like it never has before. New characters mean new moves and this game has plenty of both. My personal favorite is being able to fly, whether it’s with Superman, Green Lantern, Hawkman, Man-Bat, Brainiac or Wonder Woman……to name a few (not to mention Sinestro, General Zod, Hawkgirl, Killer Moth, Supergirl & Martian Manhunter). You can also double click the fly button to give yourself a speed boost, which is especially fun at street level. There is a little bit of a learning curve to flying (it takes a minor amount of practice), but once you’ve got the hang of it it’s a blast! One other bonus, any time you fly around Gotham City (not within the levels) as Superman, you get to hear the John Williams Superman movie score! My heart swells just little anytime I take off as Superman and that music starts. Superhero scores doesn’t get much better than that. Also, it’s a blast running through the streets as The Flash….be careful if you’re prone to motion sickness. You can easily run yourself dizzy.Now that I’m used to it, I really like having the whole of Gotham City to cruise around. It’s extremely confusing at first to get around and I wouldn’t recommend it until you’ve completed the Story Mode. Doing that will give you a good intro to the city as a whole. Plus, it’s just more fun to travel around when you have the luxury of switching to other characters. I have made extensive use of the Map View to find objects scattered all over the place. BTW — don’t forget to spend a good amount of time at the local Carnival playing the games along the boardwalk and riding the rides. There are gold bricks aplenty to be found there.I think my favorite enhancement has got to be the fact that there are Checkpoints within the levels. Some of the levels in other Lego games seem so long, that sometimes you would need to put aside up to an hour to get one finished or you lose your progress. In this one, there are Checkpoints (and they tell you load and clear when you are near one) that allow you to save your progress so you can exit the game and pick up where you left off. I will say that I had a couple of issues with that in the Wii version for the game where it still took me back to the beginning, but other time when it worked the way it was supposed to. However, I had no issues with the PC version.On the down side (which is really mostly nit-picking), the Checkpoint option not working a couple of times on the Wii version was very frustrating (I’m sure just a glitch). I wish there was a way you could just exit out and it would automatically save your progress wherever you happen to be in the level. Some of those levels are really long and I just hate having to retrace my steps…..that’s what Free Play is for.Playing in 2-player mode is tough. Because it is a dark game in many instances and so much is going on, it’s hard to follow your character sometimes when you’re playing with someone else. I loved it when they came up with the split screen, but when you’re just running around Gotham City it stays a split screen even if you are right next to the other player — I don’t get that one.My only other real beef is how the game runs on the Wii compared to the PC. There are basically 3 sections of Gotham City (North, Central, and South) that are connected to one another by bridges. On the Wii, there is this pause in the game when you travel from one section to another as the system loads the section you are traveling towards. In the PC version, the traveling is seamless. I would assume that the same seamless travel holds true for PS3 and Xbox. It’s frustrating knowing that you can potentially move with ease through all of Gotham City, but because you’re using the Wii, there are these annoying pauses and loads. It is especially annoying when you are flying. In the Wii version, you can ONLY travel from one section to another across bridges, so when you are about to fly across water to another section, the game turns you around like you’ve hit an invisible wall and won’t let you continue forward until you’ve brought yourself down to ground level and use the bridge. In the PC version, you get to fly all over the city without ANY break in the action. Unfortunately, it drives home the fact that the Wii falls a little short compared to other systems. Also, I know there are…